Garrya elliptica: now in catkin flower around Wanstead Station.
A few years ago, someone said to me: “It’s a pity about the Garrya elliptica at the station. We never see the catkins.” My ears pricked up. I had only just found out about Garrya elliptica a few weeks previously when I’d seen them at Anglesey Abbey’s winter garden and been transfixed by the curtains of hanging catkins. Did we really have such things skulking around Wanstead Station and not performing? Yes, we did! Lots of them but the contractors pruned them every autumn, cutting off the developing catkins. Of course, we never saw them.

We contacted the Redbridge Council department to get the time of pruning changed with mixed results, sometimes a show and sometimes nothing. This year, the Garrya elliptica were not pruned at all and we have the resulting curtains of hanging catkins.

In future, we’ll try and get them pruned in April as soon as the catkins finish so we should have them every year. They are just too good to miss and definitely worth conversations with the right people on the council to get it sorted.

Winter irises: four clumps against the buttresses of Wanstead United Reformed Church.
These originate from Algeria and Syria and grow wild on the hillsides in winter, not wanting to be roasted in summer. To succeed, they need exactly the right conditions: year-round full sun, poor dry stony soil and preferably against a wall, which reflects heat. The church has all this. Since the church was renovated and English Heritage was involved, only plants of the same era as the church building can be planted there.

Luckily, it turns out our irises were introduced into this country by ravaging Victorian plant hunters. Perfect! The clump in my garden, which has sourced so many of the Wanstead winter irises in our community patches, was planted by my mother over 60 years ago and it’s still going strong. Plants often outlive us.

The four church clumps were planted by lovely Don Stevens, a church member, and me in 2015. We’d dug out my mother’s compacted clump, hacked it apart and took four pieces to the church where we removed the shingle, cut a slit in the underlying plastic sheet and slid the rhizomes in. Winter irises famously do not like to be moved, so I was surprised when they flowered the first October. Yes, they obviously thought they were in the right place too! They have expanded and flowered from October to March every year since then. A real Wanstead delight. Sadly, Don died the following year, but the smiling winter irises are a fitting legacy to him. 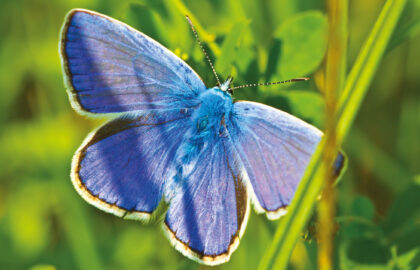