In the 23rd of a series of articles, David Bird discusses the work of Redbridge Music Society and introduces Jonathan Radford and Ashley Fripp, who will perform at Wanstead Library this month

This month, Redbridge Music Society resumes its programme of bringing high-standard, live musical events of all styles and genres to the borough with an evening of vintage Roaring Twenties jazz given by award-winning musicians Jonathan Radford (saxophone) and Ashley Fripp (piano).

We are also delighted to announce that Wanstead resident and international soprano Lucy Crowe is to become Redbridge Music Society’s new president. Many will remember how Lucy and her husband Joe showed their commitment to the local community during lockdown by performing outside local homes and hospitals.

Jonathan Radford initially studied at Chetham’s School of Music before completing his Bachelor’s and Master’s degrees at the Conservatoire National Superior de Musique de Paris, being the first British saxophonist to enter Claude Delangle’s world-famous saxophone class. He continued his studies at the Royal College of Music. Jonathan has won many awards, including Commonwealth Musician of the Year, gold medal and first prize winner in the 2018 Royal Over-Seas League Music Competition and prizewinner in the French SaxOpen International Competition. He has performed throughout Europe at many prestigious venues, such as Wigmore Hall, Bridgewater Hall and the Philharmonie de Paris. He is a keen promoter of contemporary music and has premiered works by Betsy Jolas and Luis Naon. He is passionate about chamber music and co-founded the Yendon Quartet, a saxophone group that regularly broadcast on Radio France.

Pianist Ashley Fripp studied at the Guildhall School of Music and Drama (GSMD) with Ronan O’Hara and at the Scuola di Musica die Fiesole (Italy) with Eliso Virsaladze. He has performed extensively as a recitalist, chamber musician and concerto soloist across the globe and has appeared at many of the world’s most prestigious concert halls, including Carnegie Hall, Amsterdam Concertgebouw, Musikverein and all major London concert halls. He has won many national and international prizes, including the coveted GSMD Gold Medal. He has collaborated with many orchestras and has worked with distinguished conductors such as Vasily Petrenko, Semyon Bychkov and James Judd. He recently completed his doctoral studies into the piano music of British composer Thomas Adès.

Jonathan and Ashley will be performing works by the great American saxophonist Rudy Wiedoeft and others, ending with Gershwin’s Rhapsody in Blue. The evening will be dedicated to the memory of local jazz pianist Keith Nichols, who died earlier this year.

Jonathan and Ashley will perform at Wanstead Library on 26 October from 8pm (booking required; visitors: £10; members: £7). Call 07380 606 767. Redbridge Music Society is supported by Vision RCL and affiliated to Making Music. 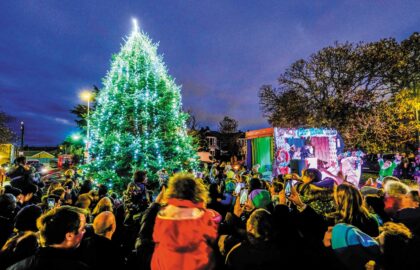