The Thames21 project is making improvements to the River Roding adjacent to Wanstead Park. Catchment Partnership Development Officer Will Oliver provides an update in the third of a series of articles

The River Roding is London’s third-longest tributary of the Thames. It rises in Essex before flowing 50km south, through east London, meeting the Thames at Barking.

If you head down to the River Roding at Wanstead Park, you may notice some felled trees in the river channel. These trees are actually playing an important role in restoring habitats within the river, and have been added as part of a volunteer-led project run by Thames21, with support from City of London (Epping Forest) and Vision Redbridge Culture and Leisure.

Historically, before humans began ‘tidying up’ landscapes, rivers would have been full of fallen trees and large woody material. As water flowed around these structures, it would have been forced to move at different depths and speeds (these rivers are known as having high flow diversity). Different species of animals and plants each have their own preference for different depths and speeds of water, and so rivers full of fallen trees are rivers full of wildlife.

Over the years, many of the fallen trees have been removed from the Roding (something replicated in rivers all across the country). This, coupled with historic artificial straightening of sections of the river channel to reduce flood risk, has resulted in much of the flow diversity of the lower Roding being lost.

With help from our team of enthusiastic volunteers and City of London staff, we’ve been working to address this and improve habitat within the River Roding adjacent to Wanstead Park. The first step to this project involved tree surgeons selectively felling trees and large branches into the channel. A volunteer team then manoeuvred these trees into position so they provide maximum benefit to the river channel. Some trees were used to protect areas of the bank from erosion, whilst others were used to speed up flows in areas where the river was otherwise unnaturally lazy and slow. Our teams then had to drive stakes into the river bed and secure these trees in place with wire cord to prevent them being washed away in high flows.

This work will instantly help improve flow diversity and encourage a greater range of wildlife to return. Over time, as these structures establish themselves, the river will begin to permanently shift away from its current straight, canal-like, course, with water instead following a more sinuous, natural and ‘wild’ path within the original river channel.

So, next time you see a fallen tree in a river, make sure you take a moment to appreciate all the great things it’s doing for the river and its wildlife!

For more information on the Thames21 project in Wanstead Park and other areas, email will.oliver@thames21.org.uk 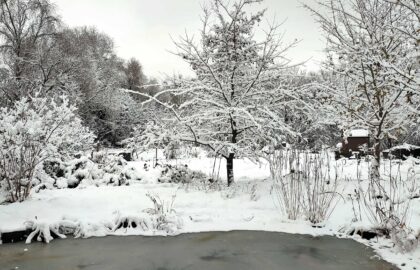