Redbridge Council has declared a climate emergency, committing to go carbon neutral by 2030 and carbon free by 2050. The council unanimously carried the motion – brought by Wanstead Village councillors – on 20 June.

Enactment of the motion will bring the whole question of the environment up the council agenda. The big challenge now is to put the worthy words into action.

The motion commits the council to carry out a green audit of its services and tackle air pollution, particularly at schools. Plastic use is to be radically reduced in council operations, with efforts being made to cut single-use plastic right across the borough. The waste and recycling elements of the motion look to very much focus on stopping producing and throwing away so much in the first instance.

The council will look to make existing council-owned property as energy efficient as possible. Renewable and sustainable energy will be positively encouraged in Redbridge through the council’s planning, estate management, investment and procurement policies. Ideas like municipal renewable energy companies will be looked into alongside other London boroughs.

There will be big efforts to improve biodiversity, with tree planting plus the extension of wildflower planting schemes. There will also be advice on how to live in a more sustainable way.

Much of the content of the motion is drawn from the Wanstead Environmental Charter, with its emphasis on the need to address climate change, biodiversity and pollution. One of the five means to do this will be via better cycling and pedestrian facilities for people to enjoy. These ideas will be based on the lessons from the mini-Holland scheme in Waltham Forest, which has had a dramatic impact on tackling air pollution and improving health, with the number of households exposed to more than the EU recommended maximum amount of nitrogen dioxide dropping dramatically, from 58,000 in 2007 to just 6,300 in 2017. The recently announced Local Implementation Plan will see some of these developments coming to Wanstead in coming years.

So, these are exciting times, as the environmental face of Redbridge is set to change. The key, though, will be to keep up the momentum. The most important word in the motion is emergency. The Intergovernmental Panel on Climate Change said the world had 12 years to stop warming going above the disastrous 1.5ºC. Well, we have spent the first year expelling more hot air on the subject; now, the time has come for action. Redbridge Council has expressed its intent to take on the crisis, but it will be ultimately judged by what happens on the ground to make this a reality.

For information on the environmental charter, visit wnstd.com/charter 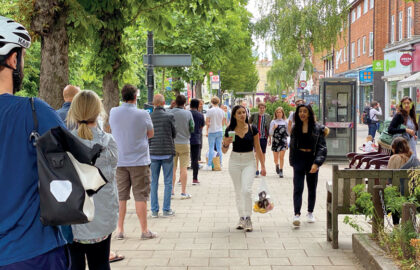